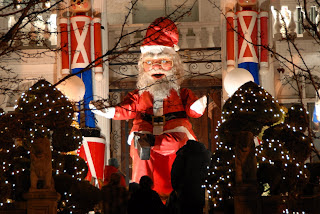 Here's a picture of Santa that I find almost scary. There's a nabe in Brooklyn called Dyker Heights and the Christmas decorations are remarkably excessive.
Richard Powers would be my favorite writer if only he wouldn't stray into fantasy/sci fi. Luckily for me, The Echo Maker is firmly set in the current day, and, even though the main character doesn't know it, the world is as normal as it gets.
Obtuse enough? Probably more than enough, so I'll get to it.
The book opens with a 30ish woman being called to her childhood home to care for her brother, who has been in a horrific accident. He gets better faster than anyone expects, but his brain isn't wired the way it used to be.
He develops a fairly rare disorder known as Capgras Syndrome, in which the people closest to you seem like strangers. He sees that his sister looks just like his sister, but his amygdala has been damaged and he's lost his emotional attachment to her. So his brain tries to explain this by assuming she's someone who has been sent to spy on him or keep track of him--for reasons he can't figure out.
Clearly, his sister is devastated by this development. Their parents are dead, and she's always taken care of him through his troubled youth and adulthood. She knows she'll have to shoulder the burden alone, and she's determined to hang in and face whatever comes.
One of the most frustrating things for her is that he's very antagonistic to her, but he's desperate to see his sister. He thinks someone has kept his sister from visiting him, and this breaks her heart. One very small benefit is that she sees how much she means to him, but, as I said, that's a very small benefit.
Powers writes about the scientific and medical issues behind this syndrome so seamlessly. His skills are extraordinary. The story carries you along, and you barely notice that you've learned so much about the brain, and how it's organized.
Supporting characters include the neuropsychiatrist who's in charge of the case, and a former boyfriend who lends a much needed hand.
The book is a powerful reminder of how fragile our brains are, and how we rely on those closest to us. It's a beautiful portrait of family and duty and determination. I recommend it highly.
Posted by Susan X Meagher at 12/11/2007 01:54:00 PM 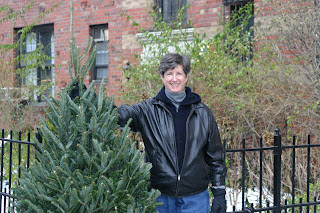 Here's a picture of my favorite elf carrying the Christmas tree home. We don't have a chimney, so she has to bring it in through the front door.
On to a book that takes place in the cold, but Christmas is not celebrated.
The Yiddish Policeman's Union is the kind of book that earns you odd looks when you read it on the train.
The title is a bit odd, but the cover is very attention grabbing. It's very evocative of the book, which is an interesting amalgam of Jewish and Tlingit totems.
Michael Chabon is a master at delving into the lives of his characters, and, in this book, he's succeeded wonderfully. The story is part noir-detective novel, part mystery, part social commentary and, above all, fully engaging.
It's a little hard to get past the first few pages if you're not exposed to a lot of Yiddish speakers, but once you get the rhythm, it's a snap.
The story concerns his vision of how the world would be different if Israel fell to a disorganized mass of Arabs, Persians, and Palestinians in 1948 and all of the Jewish inhabitants dispersed. Many of them moved to Alaska when the US government allowed them temporary status in that territory, thinking the tumult in Israel would be solved in a year or two.
It's now been 60 years, and certain factions of the US government have decided the Jews must leave at the end of the year. The fact that they've turned Sitka, Alaska into a booming megapolis of 3 million isn't taken into consideration.
A seemingly inconsequential murder makes several balls start to roll and our heroes, members of the Yiddish Policeman's Union, start to unearth the real tale behind "reversion" and many other dark secrets.
Given the topic, it sounds as though the book would be maudlin, or at least somber. But it's actually light-hearted and strangely optimistic.
Chabon is clearly a gentle soul, and many of his characters have a soft center that lurks just behind their sometimes hard shells. His writing style is clever and he forms so many interesting metaphors and similes that you'll have to stop just to admire them.
While reading the book, I tried to convince everyone I encountered that they should read it. Most refused. But I'm going to keep banging the drum for this fascinating book.
Posted by Susan X Meagher at 12/07/2007 11:12:00 AM